Hip craft beer colossus BrewDog has finally come to Reading with a large new beer and burgers pub on Castle Street. Can the Scottish brewers resurrect the dead former Public space? Is the beer really worth London prices? Are their burgers banging? James Moore and Claire Slobodian review the beer, the bar and the menu at the new BrewDog Reading to find out.

The bar and the beer

When I first heard that BrewDog was going to open in the former Public bar on Castle Street, I was excited. I’m not a massive fan of the BrewDog brand (unlike the merch-clad superfans on the opening night in March), but the spacious bar building hasn’t been very successful in any of its previous guises. At last count it has been: Public Reading, Rynd, Dogma, Evissa, The Litten Tree, French’s, Applejacks, Holy Rumes and Whispers (did we miss any?). I never liked this venue in any of those incarnations, but, like Doctor Who, it’s always worth giving the new kid on the block a chance. So will this one do any better and stick around a while?

Well, BrewDog have definitely proven they know how to run venues. The Scottish beer brand can arguably be credited with taking the UK craft beer movement mainstream over the past ten years. Since creating their signature Punk IPA in 2007, they have developed a somewhat cult status and expanded to venues across the UK and beyond with BrewDog bars in Barcelona, Helsinki, Tokyo and more.

The Reading bar sits in a pretty central location, surrounded by The Sun, Sweeney & Todd, The Horn and Be at One, none of which offer real competition to BrewDog. The exterior hasn’t changed much apart from the whacking great BrewDog logo above the door, but stepping inside shows quite a big difference. After years of oddly empty, lifeless venues, they’ve finally made good use of the room.

The design is industrial chic-meets-hipster. There are metal and rough wood booths along the left hand side, while the rest of the space is filled with high tables and stools, which could be used for solo drinking or big groups.

Along the back wall is a BrewDog merchandise area with clothing and other knick-knacks (or possibly gewgaws?) next to a beer fridge filled with cans and bottles, both Brewdog labels and guest brews, for takeaway. There’s also a corner dedicated to vintage pinball machines, although nobody was playing on them during my visit.

In the far left corner there’s a theatre-style wooden seating which is used for their series of meet the brewer events, and a nice way to make use of the high ceiling space. I suspect that the event calendar will increase in the coming months, I even spied a ‘Pass the Pigs’ tournament flyer.

So, what about the beer? The bar has about 20 taps on, with all the beers available that week displayed on the cinema style board above. The signature is the Punk IPA, which they claim will never be more than two weeks old. However, at £5.45 a pint, my tip is not to bother ordering that, or any of the headliners really, because you can find those a lot cheaper in other pubs around Reading.

Instead, go for the seasonal BrewDog draft pours which have far more interesting flavours, and prices. I tried Clockwork Tangerine, an orange-infused IPA, which was mellow and pleasant, but felt slightly lacking.

The other core BrewDog beer worth ordering is the ‘live’ version of Dead Pony Club – their session pale ale. Conditioned in a key keg and fermented with living yeast, it’s akin to a cask beer and the closest BrewDog gets to real ale. It had an interesting, deep flavour. It’s also cheaper, at £4.90. I quite liked it – but would have preferred to see the live process used on a more interesting beer than Dead Pony Club, which has a more subdued flavour than other brews like 5am Saint or Elvis Juice.

As well as Brewdog’s own labels, they also have a section for guest brews from other breweries, which rotate regularly. On my visit, they have beers from Uprising, The Bruery and Magic Rock on tap, but I’ve also seen Wild Weather and Siren up there too.

It’s fair to say the beer prices are higher across the board than other pubs and bars in Reading. Most pints hit the £5.30 mark. They’re not quite at London prices yet, but it’s noticeable when you go to pay at the bar. Make sure to watch out for the symbols for half pint prices as well, or you might be in for a surprise when paying for a pint.

As well as all that beer, Brewdog has a one-pager menu of seven burgers, two hotdogs, some sides and a couple of token salads, so I joined James to check out the food offerings alongside the beer.

Sadly, things go slightly downhill when we come to order dinner. Often there’s table service, but despite it not being very busy on our Wednesday night visit, I have to head up to the bar to order. There, I’m told the kitchen is one chef down and they can’t put any food orders through for 30 minutes. It’s enough to cause another, less patient, diner behind me to walk out in frustration. I wait it out though and in about 15-20 minutes am able to put through our table’s order.

After another sizeable wait for the food to reach our table, it’s served with no real ceremony, on battered silver metal trays and in enamel mugs, just like at Bluegrass BBQ. There’s a giant steak knife stood up in the beef burger, but everything else looks a bit flat.

From the beef burger menu I picked the Chipotle Chorizo which turned up sizeable and not greasy. It had a chunky pink beef patty which the menu told me is premium Manchester-raised brisket. The quality and flavour of the beef is entirely hidden though by the fat, oily, chorizo sausage and padron pepper filling. It’s basically just pure heat intensity with no complexity of flavours. It’s an acceptable burger, but not a patch on the well-balanced and well-cooked patties at Honest Burgers. And at £9-£10 a burger, it’s also more expensive.

The Cluck Norris southern fried chicken burger turns out to be decent and not heavily fried, in a tasty sesame seed-topped brioche bun. But it’s not especially moist. It’s also missing the promised cajun mayo, or it’s so mild you miss it entirely.

There’s also a scattering of vegan and vegetarian options on the menu, which mainly consist of things made out of Seitan, a wheat-based meat substitute. After ordering one of those, however, a bartender comes over to let us know they’re actually all out of Seitan.

It means the vegetarian in our party only has one option: the Soy Division hotdog. It’s a tofu-dog in what’s meant to be a brioche bun, but is actually quite a dry whole-wheat roll. It’s lifted slightly by a subtle avocado hummus and crunchy pickled carrots. But overall it’s a bland disappointment.

We all skip over the chicken wings in favour of a plate of vegetarian-friendly buffalo cauliflower. A large portion of crisp cauliflower florets are barbecued to a perfectly-balanced texture. They are neither soggy, nor burnt and have a deep smoky flavour. They’re all doused in a hot sauce glaze, rich in a strong, peppery spice. There’s a vegan mayo on the side to balance out some of that tingle. It’s the one real highlight of our meal and the only dish we all agree we’d order again.

BrewDog may have started as a punk brand, inspired by difference, but as it’s gotten bigger, it’s crept closer to the chain mould. The Reading bar isn’t wildly different to the Soho space, or the Bristol bar, or probably, the Barcelona bar.

There are still flashes of originality though, like the local breweries on rotation, and the interesting flavours in their advanced level beers. The bar also offers one of the biggest craft beer selections in town. But today, BrewDog is more of a marketing company that happens to make beer than a punk brewery. The beers are marketed well but the taste doesn’t quite live up to the hype.

But they’ve clearly invested in the Castle Street building, more than any of its previous owners, and the bar now feels more relaxed, welcoming and an enjoyable place to spend time. Overall, it’s fun. And despite the scale of the brand, the BrewDog bar still doesn’t take itself too seriously (if you ignore that whole trying to copyright the word ‘punk’ thing).

We say, skip the food, unless you order the buffalo cauliflower, order up a beer you’ve not tried before and spend a couple of hours chatting away. You’ll have to like a bit of nu-metal though, the soundtrack had quite a lot of Papa Roach and Linkin Park on rotation during our visit.

Like many chains, it’s comfortable, you know what you’ll get and what flavours to expect. It’s not going to set your world alight, but we’re still certain that Brewdog’s incarnation of the ever-rotating Castle Street bar will be sticking around for sometime yet. 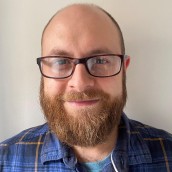 The best food markets in Reading