It’s been about six months since I last wrote about a new bar for Explore, which shows just how rare bar openings are in Reading (admittedly I have also been off the Explore game lately thanks to life getting in the way).

We might have more than 15 restaurants opening this year, but new bars in town? They’re thin on the ground. That’s partly to do with the fact we already have a pretty established bar scene, and partly because it’s pretty damn difficult to get an alcohol licence in our ‘cumulative impact zone’. But last month that changed when I spotted on Instagram that 7Bone Burger Co were launching a new beer bar underneath their St Mary’s Butts restaurant.

So I paid a visit to Strobelight Honey (I know, more on that name later), to sample the beer, bar snacks and wood-clad vibe to find out what it’s like in the burger basement. Read on to discover what the newest bar in Reading is like with my first look at Strobelight Honey.

A new craft beer cubby hole from the team behind 7Bone Burger Co. It’s downstairs at the St Mary’s Butts restaurant and has a small bar serving up keg beer and a well stocked fridge of cans and bottles. The bar came about when one of their regional managers decided to put the underused table area in the basement to better use. And lo, a new beer bar concept was born. Apparently if it works well, the plan is to role it out to their Southampton branch and possibly beyond.

What’s with that name? 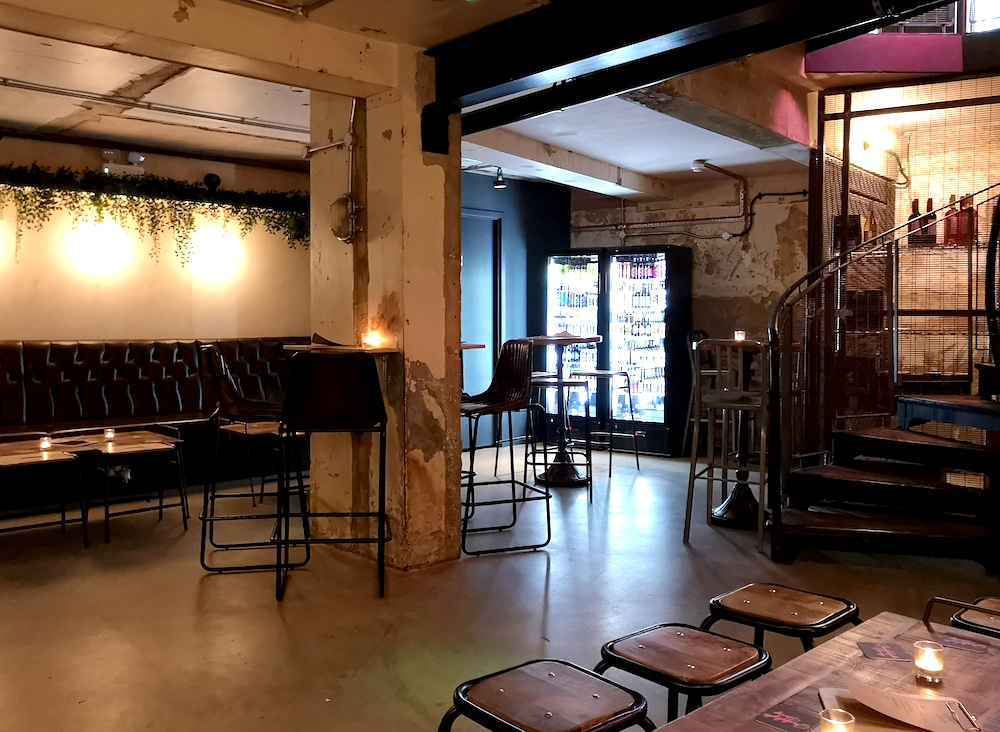 When I first heard it, I thought the name Strobelight Honey was a bit silly in a pretty hipster sort of way. Then I Googled it. It’s the name of a rap song from the ‘90s that’s also silly and pretty unflattering to women (a rap song unflattering to women? No, who’d have thought it?!) and there’s an explanatory Urban Dictionary entry that I can’t even be bothered to type out. Sigh. The bartender serving me laughed it off, claimed not to know about that description and that the name was just a bit of fun. Which it probably is, but still, hmmm…

Does it have a nightclub feel then?

No, fortunately. You descend a metal spiral staircase into what feels like a man cave. It’s all wood-clad and distressed plaster with pleather benches around the wall to seat about 20 drinkers with a small wooden plank bar at the far end. It’s more like a smaller, slightly less punk BrewDog.

There’s no strobelight, fortunately, but there is a cheeky pink neon name sign. On my midweek visit, there were four or five other drinkers around, outside my group, who all seemed to pop in for a quick drink before or after chowing down on giant meat patties upstairs.

The other thing that turns off the nightclub vibe is a laminated A4 sign on the bar advising customers that ‘vertical drinking’ is forbidden, presumably as a clause of their alcohol licence. That’s a term pretty much only used by the police to refer to crowds of standing up binge drinkers and the potential for violence in bars. It’s understandable in a busy town centre, but if the police and the council think there really will be young binge drinkers in Strobelight Honey, then they haven’t looked at the price list.

Well, there’s beer, or there’s beer. And as you might have guessed from my last paragraph, it’s on the pricey side. There’s six keg taps on behind the bar and on my visit there was a good mix of local brews and big names: Siren Craft Brew’s seasonal Suspended range, Brew By Numbers from London and Bristol’s Lost & Grounded.

The draft list was well curated with a number of intriguing flavours and interesting pours, such as the tingly, sour lime leaf pale ale called Limes Against Humanity from Southampton brewery Dancing Man. Which I enjoyed so much I had it twice.

One tap will always serve 7Bone’s own brew, Cosmic Bone Juice – another teenage boy’s snigger of a name, although a funnier one this time. Brewed with Brighton’s Bison Beer, it’s a light, easy drinking pale with a juicy, fruity note and I can imagine it going well with a burger dinner.

They’ve also gone for the distinctive wide, squat pint glasses as seen at Camden Town Brewery, with a default serving of two thirds of a pint.

Prices range from £4.25-£5.25 for that serving. If you were to ask for a pint – which one of my friends did, without checking the price first – you can be charged up to £8.20. And I thought BrewDog’s £5 pints were expensive.

It seems even more pricey when you consider none of the ABVs I tried that night went above 5% – a similar pour at The Nag’s Head is £4.80 for a keg pint and at Double-Barrelled Brewery it’s about £3.80 for two thirds.

Under the stairs is a packed fridge of bottles and cans to drink in, featuring everything from Tiny Rebel to Mead.

Yes, you can get the full 7Bone menu to order if you ask nicely and they’re not too busy. Apart from that, there’s also a special new menu of meaty, fast food-style snacks, including MattCHKN Nuggets (£3.95), Tater Tots (£3.50) and greasy, but delicious, chicken-fried olives (£2.50).

Behind the bar there’s jars of snacks including peanuts, pretzels and beer sticks – which turned out to just be beef jerky (all £2.75).

So, what’s the verdict?

Strobelight Honey is a cosy, warm bar with a good craft beer menu, but it’s pretty blokey. It reminded me of the type of bar that your craft beer-obsessed friend might open in his shed – if he had access to kegs from the country’s best breweries. And in some ways, that’s exactly what it is, just on a bigger scale.

Opened as a side project by one manager who picked out everything from beers to fonts, it’s pretty much in line with that slightly laddish, ‘I bet I can eat a more monster burger than you’ vibe 7Bone has cultivated on Instagram. And it feels like the perfect place to bring a wider beer menu to that target market.

Having said all that, I would visit again. Despite the name, it doesn’t feel off-putting inside, and the beer selection is interesting enough to see me go back occasionally – if I avoid pints. It’s great to see another addition to the craft beer scene in Reading gaining traction over weak lager or warm beer, but for Strobelight Honey to get a wider audience I just hope they take another look at those prices, and that name.

Get there: Strobelight Honey is a 10 minute walk from Reading Train station. It’s only a thirty second walk from almost all Reading bus stops at St Mary’s Butts or Cheapside.

All the street food vendors to try at Feastival 2019

Who are Double-Barrelled Brewery?