Reading Between the Lines returns with the much anticipated final installment in their ‘Conquerors Trilogy’, the story of the son of Matilda the Empress, performed in Reading Minster church.

Is ‘Henry II’ from Reading Between the Lines our most anticipated theatre production of the year? The ambitious local theatre company’s production of ‘Matilda the Empress’ was surely the most talked about cultural event in Reading last year, winning Cultural Awards, five star reviews (from me as well) and a spot in the Guardian’s favourite 20 theatre productions of 2017 – a paper not known for including Reading in its digital pages often.

With ‘Matilda’, and ‘Henry I’ before that, RBL told powerful, somewhat forgotten stories which showed Reading’s place in history. Their innovative plays reminded us our town isn’t an office-strewn newtown. We are a royal seat, the home of kings, a must-visit destination.

As they return this month with ‘Henry II’, anticipation for the final installment in their ‘Conquerors Trilogy’ seems to be higher than ever. So, as I went in to the opening night I had one main question: ‘could RBL score a hat-trick?’.

Well, from the off, they’ve upped the ambition stakes again. ‘Henry II’ is a three week run at the imposing Reading Minster of St. Mary the Virgin, a church even older, colder and more difficult to play with than St James. It’s also dripping in history, of course, as it was originally built from stone taken from Reading Abbey, where Henry I was buried. 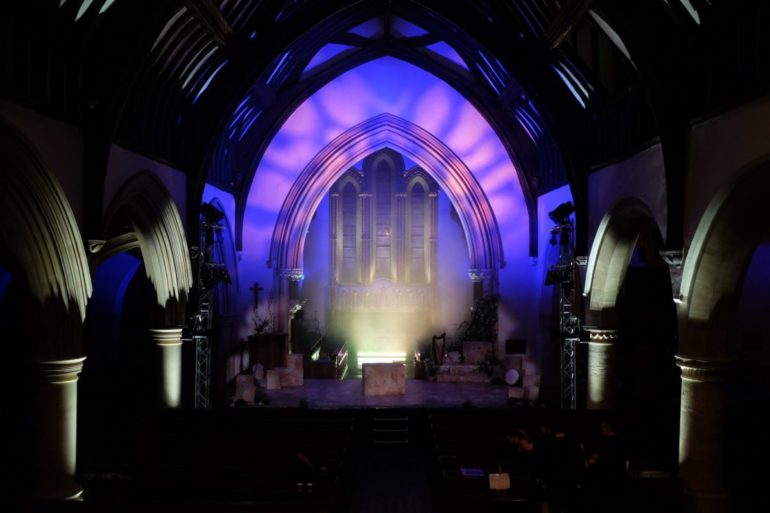 This means they have to use a traditional stage set up across the place of the altar. After the innovative use of split staging in the aisle for Matilda at St James, I’ll admit, I was slightly disappointed to see a conventional stage. But of course, moving of pews is impossible and in the end, keeping the church layout lends itself very well to larger set pieces to double for the Abbey. Reading Minster looks seriously moody and impressive under the blue lighting and smoke machine and I was almost able to imagine myself in the Abbey as cast members point up to the church’s high wooden eave while noting how impressive the building is.

The story also looks to ambition. Set forty years after the events of last time, ‘Henry II’ focuses on the life of Matilda’s son, who became king after the death of his uncle Stephen (that’s the rotter who stole the crown from a woman, if you followed the plot of ‘Matilda’). Henry married Eleanor of Aquitaine and fathered Richard the Lionheart and his less popular brother, King John. The play highlights the founding of the royal House of Plantagenet, a line of kings who would go on to rule England for over 300 years, transforming the country on a massive scale.

Events from a period of years in Henry’s life are slightly condensed to take place over Easter weekend 1164, as the Dedication of Reading Abbey approaches. Although that mainly seems to be there to position the action firmly in Reading and have characters say very nice things about our town (not complaining).

Now, that all may sound a bit GCSE textbook, but fortunately, once again, writer Beth Flintoff has weaved believable, engaging tales of real people out of dense historical detail. If ‘Henry I’ was a drama, and ‘Matilda the Empress’ a war epic, this part of the trilogy is more romantic comedy.

The script follows three relationships: Henry’s marriage to the fiery but bored Eleanor, his fragmenting friendship with old drinking buddy Thomas Beckett, who he has promoted to Archbishop of Canterbury, and a blossoming love story between a pair of court troubadours.

It’s the funniest of the three productions by far and is the first of the trilogy to really include the ‘common folk’. We see lots of jokes, fights, merry cavorting, watching of flatulists (the light entertainment of the day), market trading and raucous drinking songs all taking place outside the Abbey gates. It’s the original Friar Street at 1am.

Direction from Hal Chambers reflects this; it’s playful, jostling and spirited, like a dance. It hasn’t lost the imagination of ‘Matilda’ either with interactive elements and action often behind the audience or while walking through the nave. Although, there are occasional moments where the tone feels unbalanced. One scene of Beckett’s self-flagellation is a bit more “sinister albino monk from ‘The Da Vinci Code’”, than I really liked.

There’s also a strong musical element throughout with an impressive soundtrack of original compositions from Luke Potter, all performed by our cast of players, who could have second careers as a travelling band. Touching minstrel folk songs meet rowdy shanties about thighs the size of France and do a lot to expand our sense of Henry’s medieval world.

As Henry II, Mark Middleton is a believable king. Imposing and powerful, he takes up space and owns the stage with the certain loucheness of a born ruler. He balances it well with mournful nostalgia, looking back at his marriage to Eleanor.

Again, Flintoff’s female characters are headstrong, willful, determined women and Anabelle Brown as Eleanor of Aquitaine takes the queen’s haughty entitlement and gleefully runs with it. This Eleanor is a passionate, sophisticated woman who forges her own path, as much as she can in 1164, of course.

Meanwhile Bethan Mary-James as Marie, a travelling troubadour with a secret, is wild, adventurous but charming. More than once I found myself following her expressive and soulful face in ensemble scenes.

Her budding romance with Bart the wannabe minstrel is touching, helped along by the lilting performances from Oliver Hoare as Bart, which have a strong touch of Damien Rice about them,

Keeping me laughing throughout was Dominic Allen, a very funny scene stealer in the role of sly Welsh monk Gerald, who is obsessed with beavers (not the dirty kind, you filthy animal).

To zoom in on these characters for only one weekend, as the script does, it means some of the really juicy drama of Henry II’s life gets rushed through. In the prelude we learn that Henry’s sons tried to overthrow him towards the end of his reign and his wife took their side, but we never see that battle. We also never reach the downfall and execution of Thomas Becket. To catch us up there are some shifts back and forward in time, but they aren’t always clear and it feels like the final satisfying slice of the dramatic pie is missing.

Despite that, ‘Henry II’ is a wildly entertaining and enjoyable production. It doesn’t quite capture the dramatic sweep of its predecessors but to spurn that expectation and produce a charming, character-driven romance is just as ambitious. This is the most light-hearted and endearing of the three productions and gave me a much greater sense of life in Medieval England and of the importance of the Abbey to Reading. While the story skims some of Henry’s own bio to get there, it left me cheered and in no doubt of Reading’s role in shaping our country and one of the most powerful dynasties in Europe.

With ‘Henry II’, Reading Between the Lines have once again put on a high quality, engaging and intimate show that will draw national attention to Reading, to our historical buildings, the appeal of our town and the quality of our growing cultural scene. I left feeling entertained and enormously proud of Reading. I’d declare that goal number three.

Henry II is at Minster of St Mary The Virgin Church until 27 October, tickets are £22, buy tickets.

The Mountaintop at Reading Rep review