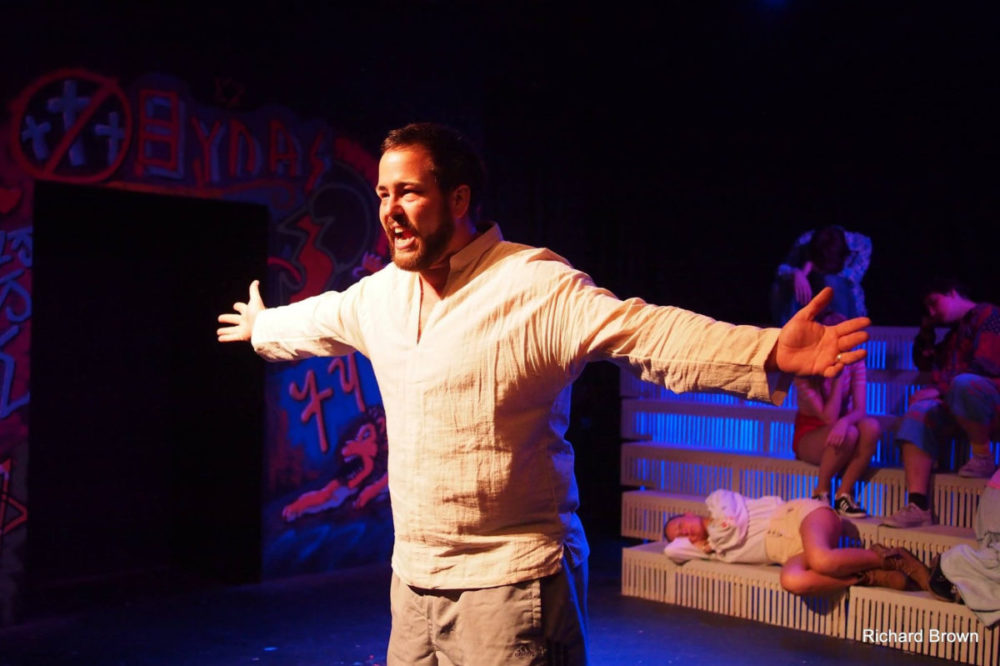 This month Progress Theatre present their first full musical for many years and it seems somehow fitting that they return with a community revival of a superstar of a production. Jesus Christ Superstar is Andrew Lloyd Webber and Tim Rice’s 1971 sung-through musical putting a long-haired rock star twist on ‘the greatest story ever told’.

Despite the title, this is really the story of Judas Iscariot. Conflicted by his beliefs and his love for Jesus, it is Judas’ decisions and actions that drive the plot forward, leading the politically sensitive Jesus into the hands of High Priest Caiaphas and towards the fateful crucifixion scene.

Fortunately, Jake Willet is captivating as Judas. Torn and soulful, he channels a young(er) Sam Smith with a very strong vocal performance and a Pete Doherty swagger for the final big busting headline number ‘Jesus Christ Superstar’, which is now so iconic even I could sing along.

Jamie Trick as Jesus switches between calm, loving and angry on a deft turn bringing added depth to the saint-like figure in sandals. He is also very strong vocally and tackles the occasional screechy falsetto admirably. They don’t all get there, but they don’t make me grimace either.

The rest of the cast form a strong ensemble. Caiaphus isn’t just a one dimensional villain thanks to brooding Russell Barrett and Ciara Roddy is heartbreaking as Mary Magdalene falling for Jesus.

Progress regular Megan Turnell brings power to the role of disciple Simon Zealotes trying to persuade Jesus to get the city to rise up against their Roman occupiers, and Thomas Hegarty has an absolute ball as a campy, Vegas showboy-style King Herod in a catsuit.

Born of the spandexed ‘70s, Jesus Christ Superstar is now more retro than hip, and a little of the plot gets lost in some of the rock star strut. But director Andy Camichel has given this production an interesting, modern edge that plays to contemporary musical fanatics.

Smart costuming has the apostles all in various stages of floaty or ravy music festival garb while Caiaphus and the high priests declare their menace with a look that is best described as ‘German industrial metal band’ – all leather trousers, big boots and hooded cloaks. With that Glastonbury vibe, protest banners declaring ‘JC Rocks’ and ‘We Love JC’ in a crowd scene got a bit of an unintentional chuckle from me too.

Clever minimal staging achieves much with very little. Roman inspired political street art daubs the walls, adding hints to the heat and anger rising in the city around our characters. The temple of sin is achieved with moody lighting and some slinky fabric while hand torches identify Jesus in the garden.

The soundtrack is a product of its time, all wailing guitars and heavy drums. Fittingly, the score comes from a live band, hidden off to the left of the stage. The musicians impress at the riffs and it really adds depth to the whole musical experience. However there were slight sound level issues during the first half of the first performance, causing the band to overpower solo singers on occasion.

Interestingly, this is a production featuring lots of newcomers to Progress Theatre, but the whole cast fit so well as an ensemble you would never know. It shows the strength of the pool of talent in Reading and is a great showcase for our town. As a community production, Progress Theatre’s take on Jesus Christ Superstar naturally loses a little of the glitz and scale of the West End show, but it hasn’t lost the heart, or the style. Fans of the iconic production will find much to sing along to.

Top gigs to see in Reading in September

Overheard in Reading in September