“I won’t let you spoil my war for me. Destroys the weak, does it? Well, what does peace do for’em, huh? War feeds its people better.” – Mother Courage

Often cited as one of the the best plays of the 20th Century, Bertolt Brecht’s classic drama Mother Courage and Her Children follows a family of misfits as they try to survive the Thirty Years War.

The titular Mother Courage and her three children drag her cart across 17th Century Europe, for twelve years, selling contraband and switching allegiances as needed to survive, and benefit from, the war.

Mother Courage shows the brutal effect of the war and the dangers of trying to make a profit from it. It has been referred to as the greatest anti-war play of all time. Knowing this, I was intrigued to see how that scale could be translated to the small stage at Progress Theatre. Fortunately, Progress Theatre’s performance does not disappoint, managing to hold both the darkness and the humour of Brecht’s text without sacrificing either.

Brecht is known for his Epic Theatre (grandly titled ‘Verfremdungseffekt’, or ‘distancing effect’ in German) which aims to alienate the audience from the characters. Brecht’s thinking was that by reminding the audience they’re watching a performance and removing any emotional investment in the characters, we’d be able to more clearly assess the ideas being presented.

Co-directors Rhys Lawton and Rachel Taylor have encapsulated this, by making the most of the theatre room. Characters walk amongst the audience and interact with us. The traditional notice board also sits on stage to indicate which scene is occurring.

As with many Brecht plays, the stage is empty and black. The only set piece is Mother Courage’s handmade wagon, pulled across the stage throughout. Every other prop emerges from inside the wagon and it is the central focus in each scene, used to create a variety of spaces on the stage, or occasionally hidden and tied to the wall.

All the cast are energetic and eager but Beckie Moir plays the title role of Mother Courage with soul. You can see how much she loves her children, and her wagon. Her singing is rough, real and hits you right in the chest. 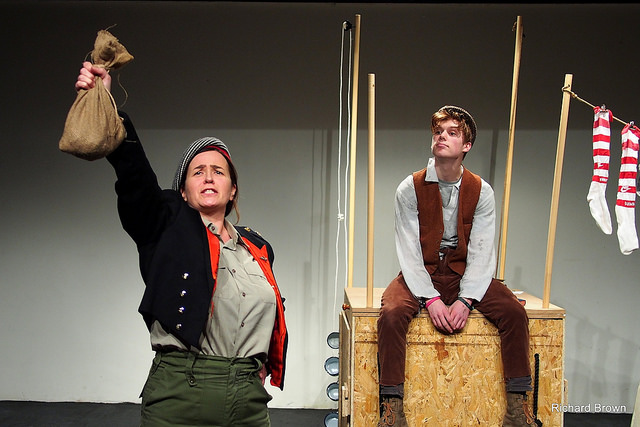 Her children are also impressive: Max Hijmering as the hero Eilif is full of character, Jack Hygate plays Swiss Cheese, ‘the stupid one’ with a funny comic timing that isn’t overplayed. Taylor Rupp as Kattrin ‘the mute’ is perfectly cast. Kattrin is the main character who interacts with the audience, at one point pulling a member of the audience onto the stage with her.

The rest of the ensemble is strong, with a wide variety of ages creating an atmosphere each time they’re on stage.

Mother Courage and her Children is a fantastic, moving performance of one of the most powerful plays of the 20th Century, put on by an dynamic cast. It is a great demonstration of the talent at Progress Theatre.

Hi, I’m Sophie, and I write for Explore Reading. I’ve lived in Reading for most of my life, and love seeing what’s new and fun to get up to in our town. I spend most of my time reading and drinking coffee.

Explore the Reading auction house at the Cattle Market

Previous Article
Things to do

The best festivals and big events in Reading 2018