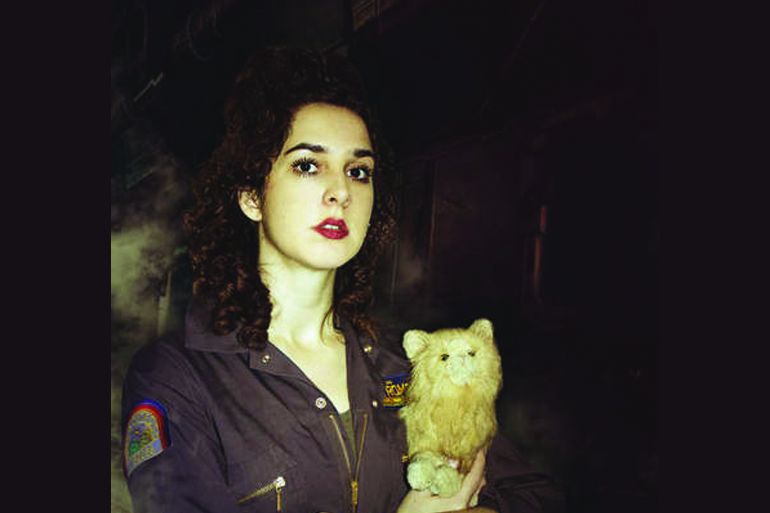 Another of the shows I’m excited about at this year’s Reading Fringe Festival is One Woman Alien from Brighton’s Cast Iron Theatre. The comedy show retells Ridley Scott’s iconic 1979 sci-fi thriller film with only one woman, some comically budget props and a stuffed cat.

As the team prepare to perform One Woman Alien at the Penta Hotel on Saturday 28 July, I spoke to one half of Cast Iron Theatre, writer/director Andrew Allen. We talk about the role of women in Hollywood, reproducing million dollar special effects with a glue gun, and that John Hurt scene. Read on to find out more about the show and find out how to book tickets at the end.

So, just what is the premise of One Woman Alien?

It’s the one show where the pitch is in the title! It’s the 1979 movie Alien, in one hour, told by one woman (Heather Rose Andrews) – playing all the parts, doing all the special effects, and throwing in a bit of a TED talk on the way.

What was it about the film Alien in particular that inspired you to create the show?

Roles like Ripley are still relatively rare. Yes, we certainly have ‘strong female roles’ in film and TV – and certainly at the moment, there’s a fashion to re-purpose iconic male roles as women. But Ripley’s gender is entirely incidental, even irrelevant to the plot of Alien. At least, we chat about that in the hour of our show. Plus, it’s a fun, iconic movie that’s familiar to so many of us even if we haven’t seen it.

So, do you need to have seen the film to get your show?

Apparently not! On our previews, we had a fair amount of happy audience members announce that they hadn’t seen it – but that they were going to fix that after seeing our show.

How do you go about reproducing that level of Hollywood film on a fringe theatre budget?

You don’t, and that’s a lot of the fun. I don’t mean that you’re going to be complacent about it, or settle for second or third best, but there’s a lot of shared fun – with us and the audience – in seeing how we do a multi-million dollar special effect with a glue gun and a stick of chalk.

Do you tackle the famous John Hurt scene?

What scene is that … ? Oh, yes. That scene is totally in there. In fact, John Hurt’s character gets a good few of the audience pleasing moments. I don’t want to say any more for fear of spoilers.

The show asks if cinema has advanced for women since Sigourney Weaver got the kickass role of Ripley in 1979. Do you think it has?

That’s actually a tough question. When writing the original draft of the show, we came across research figures that suggested that women had more onscreen dialogue in 1979 than they did in 2017. On that alone, there seems to be a bit of a stepback. On the one hand, you have fabulous films like Fury Road, but then you get genuine fury from fans of Ghostbusters and Doctor Who. I think the general rule of thumb is that if we’re still having this conversation – then we haven’t got there yet.

In space, no one can hear you scream. What would you scream, if no one could hear it?

Oh, that’s a great question, for which I have no answer. I must be showing my age though, because my first thought was ‘wouldn’t that hurt my throat?’. I don’t know: I wouldn’t want to shout out anything negative, so that’s wasted. I guess screaming into the void with nobody listening is basically Twitter, so if you want to know what I’d say, follow @my_grayne. (I honestly didn’t expect that to go into a sales pitch; it just happened).

Have you been to Reading Fringe before? What else are you looking forward to seeing?

Never been before, it’s very exciting! There are tons of shows we want to catch, so it feels a shame to only picking a couple for an example, but the Bad Luck Cabaret looks delicious, and we’re hearing amazing things about Freud The Musical.

Overheard in Reading in July

Previous Article
Things to do